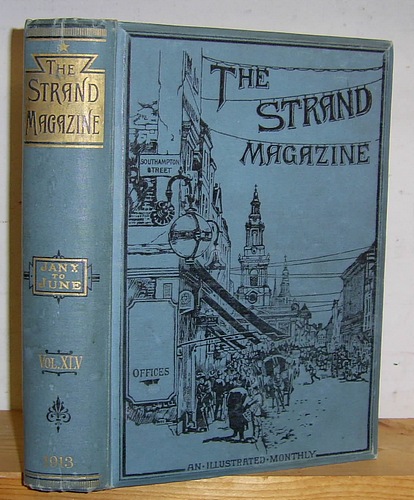 Contains: The Poison Belt by Arthur Conan DOYLE. First 4 (of 5) episodes in serialisation. Smith and the Pharoahs by H. Rider HAGGARD. Concluding 2 episodes of serialisation. Wet Magic by E. NESBIT. 6 episodes in ongoing serialisation. Short stories include: The Affair of the Montagu Diamonds & For the Cause by Richard MARSH, The Disappearing Trick by W. Pett RIDGE, Doing Clarence a Bit of Good, A Job of Work & Something to Worry About by P. G. WODEHOUSE, The East A-Callin' by Arthur MORRISON, The Longest Day of Her Life by W. B. MAXWELL, The Lord of the Fo'c'sle by Morley ROBERTS. Original blue cloth on bevelled boards with London street scene in black, lettered in gilt on spine. Lightly scuffed, light foxing, very good. A heavy volume which will require additional postage outside the UK.