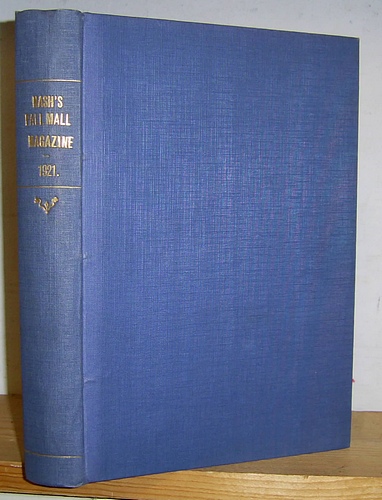 Contains: The Master of Man by Hall Caine. Conclusion of serialisation. The Poet and the Lunatics by G. K. Chesterton. First three stories in sequence. The Profiteers by E. Phillips Oppenheim. Concluding episodes of serialisation. The Head of the House of Coombe by Frances Hodgson Burnett. Start of ongoing serialisation. The Secret Places of the Heart by H. G. Wells. Start of ongoing serialisation. The poet and the Lunatics by G. K. Chesterton. One story in ongoing sequence. Short stories include: Fillingers & The Pill-Box by Lucas Malet, In Peacock Blue by E. W Hornung, Going Out for a Walk by Max Beerbohm, The Pot of Pansies by Leonard Merrick, The Mysterious Destruction of Mr Lewis Apple by Arnold Bennett. Hornung's story is one of the "extra" tales of Stingaree the bushranger, written long after the publication of the original collection of stories, and not issued in book form until the 21st century. Six monthly issues bound up (without original card wrappers) in blue binder's cloth, lettered in gilt on spine. Spine lightly sunned, but otherwise a clean and tight copy: very good. A heavy volume which will require additional postage outside the UK.