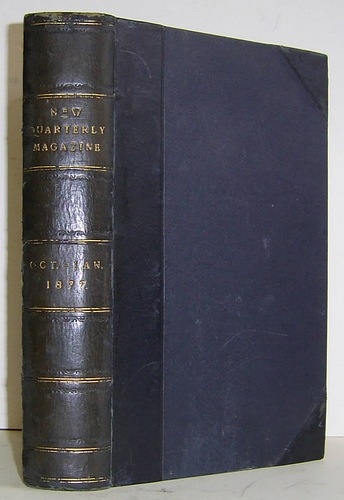 The New Quarterly Magazine, Volume VII (7), October 1876 to January 1877. Contains The House on the Beach

Contains: The House on the Beach by George MEREDITH. Short novel. Hester by Beatrice May BUTT. Short novel. Short stories include: Professor Hoffman's Folly by John DANGERFIELD, Kate Cronin's Dowry by Mrs Cashel HOEY. Late C19th black leather over black cloth, lettered in gilt on spine; brown endpapers. Lightly scuffed, very good. Meredith's short novel (81 pp) was not published in book form in England until included in The Tale of Chloe seventeen years later. The New Quarterly was a bold experiment to introduce a substantial literary magazine issued at quarterly intervals rather than weekly or monthly. It was edited by Oswald Crawfurd ("John Dangerfield") who contributed much of the material of the early volumes himself. It was a part of the premise of the magazine that any fiction published would be invariably complete within each issue: a format which allowed for long stories and short novels rather than lengthy serialisations. The magazine was not successful and ran for less than seven years (13 volumes).

Title: The New Quarterly Magazine, Volume VII (7), October 1876 to January 1877. Contains The House on the Beach

The New Quarterly Magazine, Volume VII (7), October 1876 to January 1877. Contains The House on the Beach