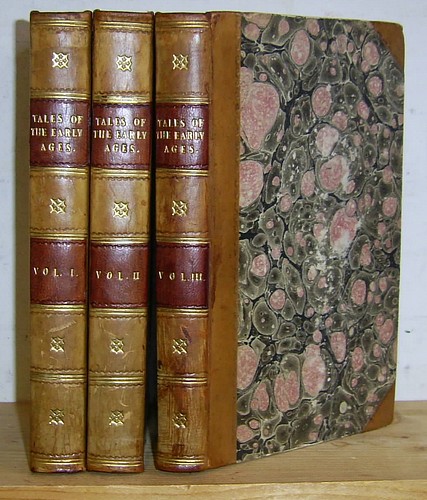 Three volumes in mid-C19th tan leather over pink-and-grey marbled boards, dark brown title labels and gilt decorations on spines. Free corners lightly rubbed, small chip near headd of lower hinge on volume II, lightfoxing, small slip removed from top of title page in volume I: otherwise a clean, tight set: very good. Sadleir [3108] in boards. Comprises five short novels progressing from the first to the fifth centuries: The Involuntary Prophet: A Tale of the First Century; Theodore and Tilphosa; or, The Olympic Games. A Tale of the Second Century; Olof and Brynhhilda; or The Bridal Banquet. A Tale of the Third Century; Sebastian and Lydia; or, The Council of Nice. A Tale of the Fourth Century; The Siege of Caer-Broc. A Tale of the Fifth Century. It seems that the intended original title was Romance of the Early Ages, which is preserved as the running-title throughout. Scarce.