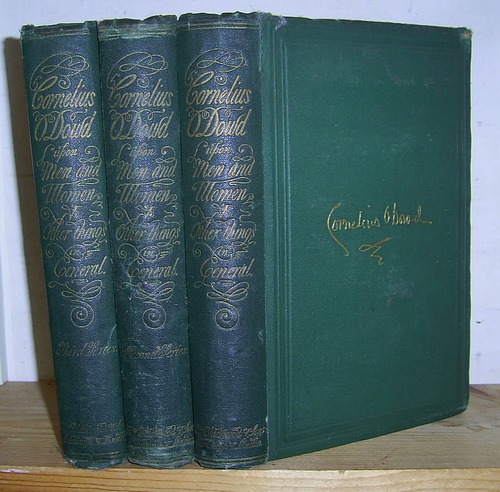 Cornelius O'Dowd Upon Men and Women and Other Things in General [First], Second & Third Series (1864 - 5)

First Edition in Three Volumes: William Blackwood & Sons, 1864, 1865, 1865. Original green cloth with blindstamped frames on boards, scroll-lettering in gilt; brown endpapers. Small nicks and chips to spine ends and corners, short repaired split to cloth on upper hinge of first volume, inscriptions on endpapers, light foxing, a good set. Sadleir [1399], Wolff [4082]. Essays written in the character of "Cornelius O'Dowd" and published anonymously. The first volume appeared on its own in 1864. Two further volumes (the "Second" & "Third" series) were issued in 1865, and volume one was then re-issued as the "First Series" (with this information added to the spine title). In this set volume one is also the first edition, as issued in 1864. A heavy set which will require additional postage.

Title: Cornelius O'Dowd Upon Men and Women and Other Things in General [First], Second & Third Series (1864 - 5)

Cornelius O'Dowd Upon Men and Women and Other Things in General [First], Second & Third Series (1864 - 5)