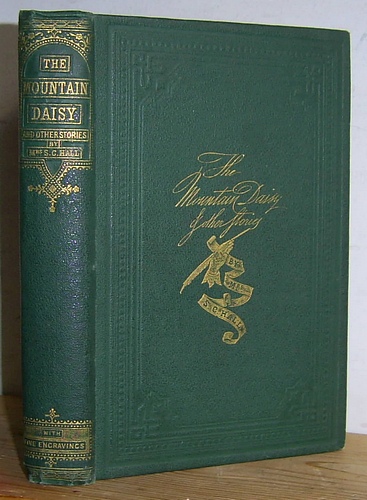 The Mountain Daisy and Other Stories (1866)

Unspecified but probably second issue. Illustrated. Original dark green cloth, with blindstamped framing and gilt decorations on front board, lettered and decorated in gilt on spine, cream endpapers. Gift inscription (1866) on front free endpaper, minimal foxing, near fine. A collection of ten short stories, which had originally appeared in periodicals: The Mountain Daisy, The Fisherman, The Rose of Fennock Dale, The Soldier's Wife, The Story of Elwin, Annie Leslie, We'll See About It, The Anxious Wife, Alice Stanley & Seven and Seventeen.The title was apparently originally used for a miscellaneous collection of stories by various authors, and then issued again in 1865 in the present format. In 1868 Nelson reissued the book (reducing the number of stories to nine by omitting Annie Leslie); changing the order and renaming the book Alice Stanley and Other Stories (under which title it is -- somewhat misleadingly -- listed as a first edition in some bibliographies).

Title: The Mountain Daisy and Other Stories (1866)

The Mountain Daisy and Other Stories (1866)