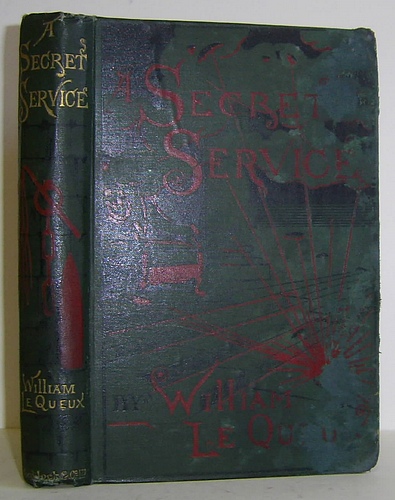 Frontispiece. Original dark green cloth, lettered and decorated in red and black (gilt lettering on spine); black endpapers. Front board damp-marked along right side with some roughness along edge; some evidence of old damp damage to edges of front endpaper; similar but much less marked on lower corner of rear board. Frontispiece orn on edges. Text clean and in good order. Fair only: a reading copy. "English readers...will doubtless recognise a few of the following chapters as having appeared in my Strange Tales of a Nihilist" (Author's Preface). A Secret Service, is a partly re-written and somewhat expanded version of the Le Queux's earlier book, originally published in 1892. The first chapter is substantially re-written, and Chapters VII, VIII & XI (A Romance of the Steppe, The Velvet Paw, The Confession of Vassilii) all appear for the first time.